The artist’s 1968 piece is to have a second life as an art installation in the newly restored Bath salts factory Bath: Mayumi Lin’s Dismantled ‘Ghost Forest’ to Be Reborn as Boats Bath’s Jacob’s… 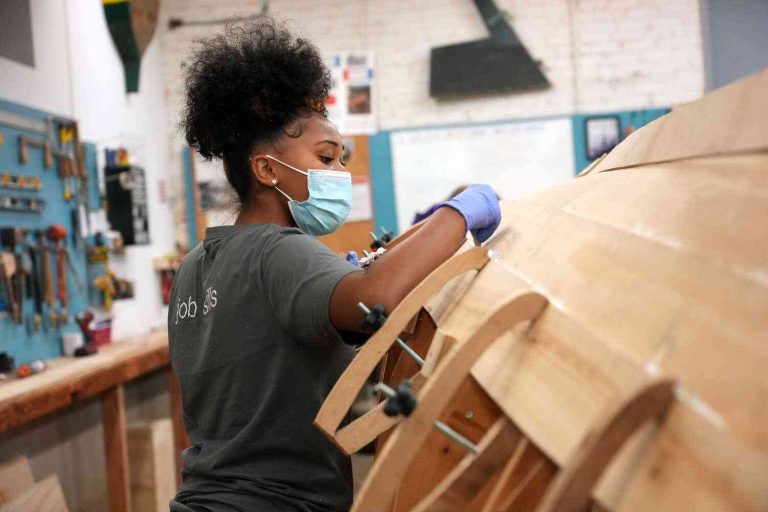 Bath’s Jacob’s Pillow theatre has revealed the gallery space that is to host an installation by “primitive” artist Mayumi Lin, which is set to be reconstructed as a boat in the 60-year-old bath salts factory where it first appeared.

Lin’s Dismantled “Ghost Forest” was first unveiled at Bristol Cathedral in 1968, but was then hidden in storage for nearly 40 years, after which she moved away to become an anthropologist and lived in the US.

The ephemeral woodworking project, originally created by Lin for individual ticket holders, the more than 2,000 people who saw the show each day or the 3,000 who were invited to view it by invitation, included origami birds, a mini totem pole, starfish and figurines of twins. It was only revealed to the public last year.

Lin’s project was created at the height of 1970s anti-conformist culture and society, known as “New Soul Revival”, when artists such as Louise Bourgeois, William Burroughs and Allen Ginsberg were throwing platforms into New York City sewers or banning crucifixes and crosses from galleries. It was notable for its 1960s-styled materials, “worn” furniture, and an avant-garde approach to design.

In a statement posted to the Pillow’s website, director Rona Pezman said: “I am pleased to announce that Dismantled will soon return to Jacob’s Pillow – but this time with a 4.8m x 24m boat as the background. My vision is to give Dismantled the same intimate, quasi-monumental setting in which it was originally created.”

Lin’s sailing vessel, which has been reworked by Charlotte Todd, will join other objects from the movement of Dismantled – skeletons, animals, black umbrellas, and even a gas mask – in the space.

Lin’s first installation of Dismantled was originally made for the first day of Pink Floyd’s UK tour, which took place in Bristol in October 1971. It was later displayed in the studio of the artist’s older brother, who was spending the day there and thought it looked like art. He told her she could have her own section of the show and she signed off on it.

“Dismantled is so awe-inspiring that I didn’t want a formal design, but rather, using crayons and quills, to create tiny, tiny little pictures,” Lin told the Bristol Post. “The work is so different from anything I’ve done before, it’s so spontaneous and I was really amazed that people could be so touched by it.”

The bunker-like compound of sections was removed from the Chapel of St Mary the Virgin, Westminister, under the Public Art scheme in 2006, and was officially closed in 2012, but the church was granted permission to house the installation until next year.

The full Dismantled will go on show on 4 October 2018 in Jacob’s Pillow, the artist’s former home, and is free to the public.

Obesity: The most powerful motivating factors