CLICK HERE to listen to the full show For about an hour on Monday, the Duke and Duchess of Cambridge caught up with the tennis-playing class of 2017—and the most eagerly awaited return to… 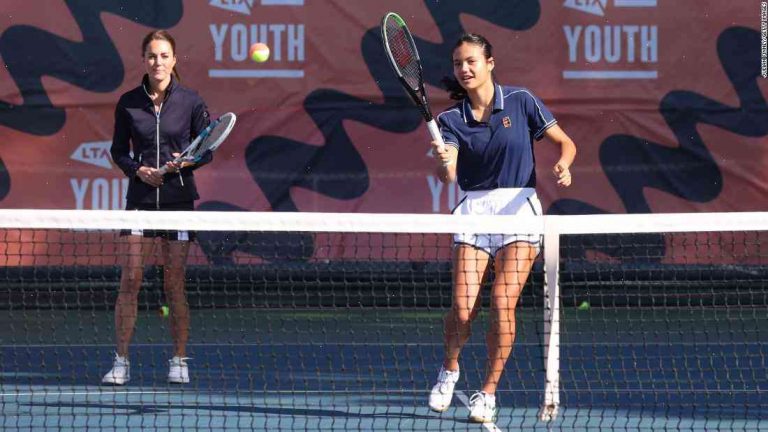 For about an hour on Monday, the Duke and Duchess of Cambridge caught up with the tennis-playing class of 2017—and the most eagerly awaited return to the UK for an international athlete in a generation.

Antidote to politics, tennis turned out to be the unlikely backdrop for an emotional goodbye to Catherine Middleton, formerly the subject of tabloid speculation on whether she would ever get married. Not only that, but the dynamic of a serious athlete drawn to a spin around the tennis court versus a Duke, known for his athletic prowess, only served to highlight their mutual respect and comfort for one another. The chances of Justin Bieber and his posse making an appearance were virtually non-existent.

Always excited to meet a new tennis star, Middleton hit the courts with Emma Raducanu, a 22-year-old Canadian phenom making headlines for the electrifying return to the courts after breaking her foot less than four months ago. At the iconic Queen’s Club in London, Middleton suggested that Raducanu had grown bored of the comfort of her favorite courts in Vancouver, and that the royal patronage was her way of relaying the fact she appreciated the change in pace to the athlete. For the Duchess, it turned out to be a match of the royal idiom against the star of the tennis world. Middleton, dressed in a green ruffled top, and Raducanu both got a giggle out of the skills of each other and their willingness to play in outfits not designed for the brutal fight-to-the-death style of tennis.

After the visit, The duchess joined Raducanu, who became a blogging sensation in the midst of her injury, for a brief game in the backyard court of the Queen’s Club with a handful of fans, sports journalists and members of the crowd gathered to listen.

The only member of her party not to play tennis, she laughed about her husband’s grip on her tennis racquet, while acknowledging Raducanu’s competitiveness, saying, “I could have gotten her anything [sic].”

Raducanu, her top hitting at the net and running onto the court, responded with, “I just wanted to meet you.” A sweet sentiment, shared in unexpected language with the duchess.

For a moment, it seemed like the young tennis pro—who grew up dreaming of playing for Canada—would say too much, or perhaps saying something that even an onlooker hadn’t expected. Raducanu, after all, was the star of the scene even though there was at least one player eager to win her love—Catherine’s little niece and nephew, who did not go to the tournament.

The smitten faces of the little girls in the crowd, playing cards and holding hands while tuning to their handheld set of tennis-player headphones, changed color to complement Raducanu’s latest poses. They remained transfixed even as the young pro got about 3 games before waltzing off the court at full speed—at which point the crowd jumped in to throw a towel at her—giving the young woman one last chance to respond to the adoration of hundreds of British fans. She responded with total emotional control, exiting the court, hands firmly clasped behind her back, looking as if she were returning to Canada after her fashion show. The crowd cheered her off.

Raducanu will be leaving the tennis courts behind soon. For now, she’s a long way from Canada—in fact, 3,600 miles from her home.

Third man on trial in Anguilla for alleged money laundering

The Diner: Danny Meyer’s culinary meeting of the minds