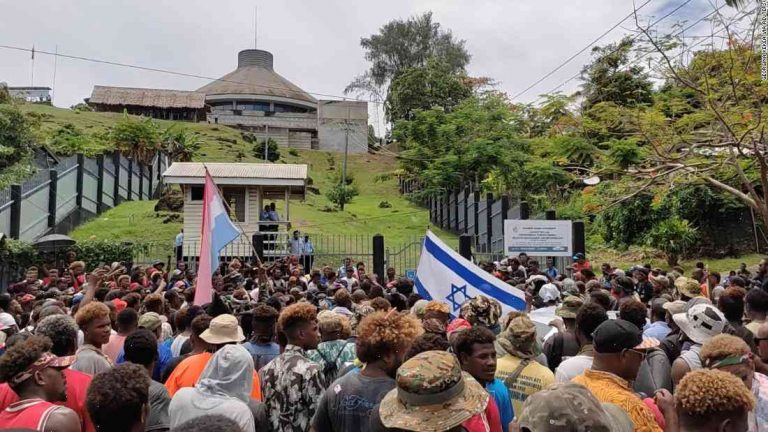 This article is over 6 months old

Scores of people are injured after being hit by rocks, walls and petrol bombs in rioting in Solomon Islands, prompting US and Australian aid workers to be evacuated from their offices.

The unrest in the capital, Honiara, began after two opposition MPs, Simon Lokodo and Paul Fitial, tried to cancel a vote of no confidence in the prime minister, Manasseh Sogavare.

The government accuses the two men of incitement, theft and breaking the law.

Malakai Katei, an MP of the opposition Solomon Democratic party, told the Guardian that two masked men disrupted a Sunday meeting of the party and tied people together by their wrists, throwing rocks at them.

Malakai Katei, an MP of the opposition Solomon Democratic party, said two masked men had disrupted a Sunday meeting of the party and tied people together by their wrists, throwing rocks at them. Photograph: Christand Cornaru/AFP/Getty Images

It took people five hours to escort the two MPs to the police station.

Lokodo was arrested and flown to Honiara on Sunday night after the police detained him and charged him with inciting mutiny. Fitial was jailed on Monday.

Lokodo alleged that soldiers, or the military police, had been behind a bungled attempted coup and the attempt to prevent their men from defying orders by Sogavare.

According to a report by the Radio Australia news service, the Australian aid administrator at the prime minister’s office has been flown out of Honiara in the early hours of Monday morning, while other staff were being evacuated to Malaita.

The US consulate has warned its nationals that it advises against all travel to Honiara, and its staff and visitors to leave.

Five police officers were hospitalised after a petrol bomb exploded in a police station, injuring four officers and a civilian, a police spokeswoman said.

She said police blocked roads leading to Honiara on Tuesday, preventing civilians from entering the capital, and had confirmed there was no fuel shortage.

There was no shortage of fuel or food, and the army had been deployed to clear roads of protesters, he said.

Fitial’s lawyer, Robert Gaskin, declined to comment on why he had been arrested.

Australian ambassador George Norton said: “My advice is that that doesn’t really reflect well on the country. We don’t condone the use of violence and this is obviously dangerous for the people of the country.”

A separate motion of no confidence was held on Monday to continue negotiations between parties in the country’s ruling coalition to settle the current government dispute.

Inside The Bold and the Beautiful’s Television’s Biggest Party