(SportsNetwork.com) – Cincinnati will look to get its run at a bowl game back on track when the Bearcats face a balanced East Carolina squad in Saturday’s Conference USA opener. Coach Luke Fickell and… 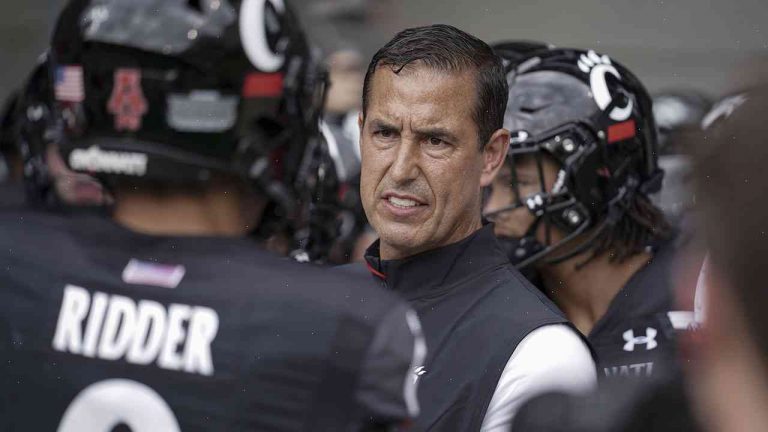 (SportsNetwork.com) – Cincinnati will look to get its run at a bowl game back on track when the Bearcats face a balanced East Carolina squad in Saturday’s Conference USA opener.

Coach Luke Fickell and the Bearcats went a disappointing 5-7 in his debut season as head coach last fall, and the program is looking to get off to a strong start to the Year 2 under the program’s marquee head coach and FBS veteran. The team’s first two games of the season are on the road, and Fickell and the Bearcats welcome Conference USA foe East Carolina for a noon kickoff this Saturday at Pete Maravich Assembly Center.

“It was a huge year last year,” said Fickell. “We had a young team but we made a lot of progress, it wasn’t as successful as we’d like but we felt like we improved every week and we need to take those lessons we’ve learned and continue to do it in a positive way.”

Last season, Fickell posted the program’s first winning record since 2010, and after opening 3-3, the Bearcats suddenly won five straight games to wind up 8-5, for an overall mark of 3-7 in the newly configured league. With three ACC schools in its league, Cincinnati can field a team without a top-tier ACC win. However, with last year’s run of conference wins, plus home dates against Florida State, Syracuse and Syracuse, this is the Bearcats’ time to make a splash and make big gains in the standings.

The winless Pirates enter the game with the league’s worst offense. ECU is just 2-12 since snapping an 11-game losing streak against Navy in 2013, while Cincinnati owns a 34-10 lead in the series, but neither team could seal a victory in its last meeting, which came last season. Still, Cincinnati doesn’t want to get caught underestimating a team like East Carolina, where strong running games lead to balanced attack. At one point, the Pirates broke a seven-game skid in 2004, and has not lost in a school-record four straight meetings with the Bearcats.

The Pirates’ run offense has often hit struggles this season, averaging just 111.3 yards rushing over their last four games. Coach Ruffin McNeill is putting it all in to the balance from that aspect, which accounts for 51 percent of the offense. The ECU passing game is more balanced, with 34 percent coming from a mixture of Jarrett Franklin and transfer Micah Abernathy. As a team, the Pirates are averaging nearly 183 yards passing per game, with a subpar rushing offense at 58.3. That could not have come at a worse time for a team that had to rely on the passing game to make it to the second round of the inaugural Cure Bowl. The Pirates can fix this issue by having a big effort from Jermaine Eluemunor, who has 20 carries for a 14.3 yards per carry average over the last three games.

Wide receiver Taylor Myers is East Carolina’s leading offensive threat, completing 52 percent of his passes for eight touchdowns and 519 yards in the last two games, but he is the only player with more than 30 catches in each of the last three seasons. Wideout Eli Sudfeld had seven receptions for 103 yards and two touchdowns in last season’s meeting, giving him 61 catches for 938 yards in three career meetings with the Bearcats.