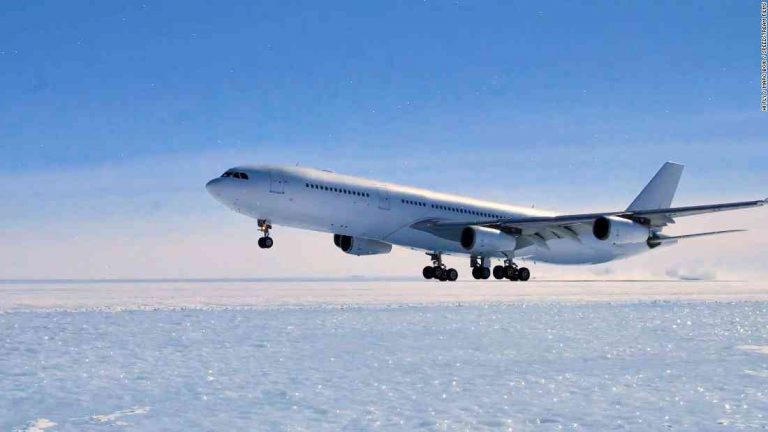 This article is over 5 months old

A fully-stacked Airbus A340 ultra-long haul aircraft has landed in Antarctica for the first time.

The roughly 450-foot (144m) long long, twin-engine jet landed under the largest of the ice caps on the Southern Ocean on Wednesday.

The Airbus A340 has a four-hundred-foot wing span and can seat up to 470 passengers.

Airbus (formerly BAE Systems) bought four A340 aircraft from India to be converted to transport large numbers of tourists to Antarctica.

The airship is operated by the British Antarctic Survey (BAS) and will become a key transport and research capability to the ice-clad continent.

The plane will conduct regular landings in West Antarctica throughout the Antarctic winter.

Planned trips will include the weekly Tupolev Tu-134 Tu, the two-seater Reindeer, the Aurora, the Russian Y-27, and the light aircraft R705 and F700.

Each aircraft will be fitted with a flight deck with all seats awash with ambient lighting, a single table and table-topped espresso machines.

The ship, Akademik Shokalskiy, visits the country once every five years, but transporting tourists to and from Antarctica is very expensive.

Some journeys can take up to six weeks to reach the continent.

“We are very pleased to have the first Airbus A340 on our ice fleet,” said Chris Pennell, BAS general manager, special operations.

“Landing it in such spectacular conditions is one of the highlights of our ice operations every year.

“The A340 is designed to carry the weight of a full-size research platform, and it demonstrates how BAS missions can help us secure future scientific and knowledge-gathering activities in Antarctica.”

The BAS expects to transfer over 100,000 passengers to and from Antarctica.

6 lessons for promoting from within in business